La Contessa and the Marquis is the first book in Lindsay’s regency cozy mystery series, Rogues and Rakehells Mystery. The book is available for preorder and its official release date is January 19th.  Head on over to Amazon and check it out.  The beautiful cover is one of my designs by the way. 😉 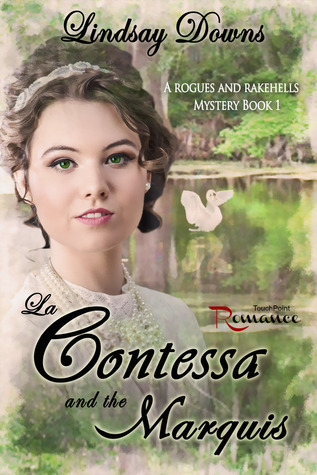 Book Description: When Bianca Maria Ledford Goretti, La Contessa de Massa, flees back to her homeland and the safety of her godmother, The Duchess of Gorham, little does she realize who’s arms she lands in.

Lord Rainer Cross, Marquis of Hathaway, is a well-known and dangerous rakehell within the ton. Little does he suspect his godmother has set him up to halt his skirt chasing days.

Over time the reason for Bianca’s return comes to light which has Rainer deeply concerned. Not sure who he can trust Rainer turns to has several of his more interesting staff. He has them use their talents to ferret out the truth.

Everything get more complicated when they learn a friend might not be who he claims to be. Not sure who to trust, except Rainer and the duchess, Bianca learns several startling facts which could protect her from harm.

Once everything is revealed the duchess steps in with a surprise, something neither could have ever seen coming.

Rainer Cross, Marquis of Hathaway, settled his shoulder against a pillar where he’d ensconced himself so he could overlook the ballroom. A warning glare to several want to be rakes was all that was needed to send them scurrying back to their mommas.

With a renewed resolve, to search down one particular individual, his piercing blue eyes studied the throng of ladies. Some too old but searching for a lover, even if for a brief tryst. Others on the hunt for a husband of which he had no interest, at least with them, as he already had his sights set on one person in particular.

Granted, he’d not seen her, except from a distance, but if the reports were to be believed she was, without a doubt the most beautiful lady, the truest diamond, to ever grace the ton.

Then, as if Venus rising from the ocean, she appeared at the top of the grand ballroom vestibule. He could feel the air rush from his lungs, something he’d never experienced before, as he fixed his gaze on her.

Seeing her in the flesh, as it were, he knew all the whispers circulating about had been true. Without a doubt she was the most beautifully, enchanting and mysterious woman he ever set his eyes upon.

He was pleased to see she was conversing animatedly with an elderly, heavily bejewelled woman. From where he was standing and the angle of the matron, Rainer wasn’t able to see her face.

“As long as she’s not my godmother, then I most assuredly will gain an introduction to the Contessa,” he mumbled to himself.

Due to the loud voices, so everyone could be heard over the musicians, he didn’t hear their presentation. His only concern was the woman accompanying the contessa as he already knew her name- Bianca Maria Ledford Goretti, La Contessa de Massa. Levering himself off the pillar he started toward them, still unable to see who her chaperone was when a friend, another fellow rake, stopped him.

“Rain, I do hope you’re not going after that delicate morsel, as I’ve it on excellent authority she’s eaten up and spit out several lords,” Tony, or more precisely Anthony Fuller, Earl of Wyatt, his friend from their days at Eton then university, informed him.

“My dear friend if she does, then I’ll die a happy man for la Contessa is a gem whom I wish to possess.”
“Ah, and that’s the rub. After she dismisses you she’ll then tread over your heart leaving nothing but a shell of a man. Trust me on this for I’m sure you’ve heard the rumour her first husband died mysteriously.”

“Tony, the only lady I fear is my godmother. If you’ll excuse me I’m going to attempt an introduction,” Rainer told him. With a pat on Tony’s shoulder he stepped around his friend and started for the divan where both ladies had settled.

As he made his way forward he wasn’t surprised to see both women had already collected a small group of young ladies around them. What he found amusing were several swains on the outskirts, all trying to be noticed by either lady.

Upon seeing a frontal assault was out of the question Rainer selected to attack from the rear. Stepping into an adjourning, but linked, alcove he easily approached them and came to a halt within feet of his object.
“Damn. I thought she wasn’t in town,” he mumbled on spying his nemesis, best known as his godmother, The Duchess of Gorham.

2 thoughts on “New Release: La Contessa and The Marquis”