She’s one of my favorite bloggers and someone I’m excited to introduce you to.  She’s a college student but also loves to write in her free time.  Her first novel, The Fallen, a Paranormal Romance, is almost completed.  Apart from working on the novel, she also writes fan fiction.  If you want to check out some sneak peeks of The Fallen, take a look HERE to read some chapters from it.

1.  Tell me about the book you’re writing and what your plans for it are in the future.

The book I’m currently writing is tentatively called The Fallen -the working title has changed several times and will probably change again! It opens with our main character Siobhan encountering a mysterious, seriously injured man in the woods who transfers to her a kind of “super power,” I guess you could call it. She thinks he’s probably dead until he turns up as her Teaching Assistant for one of her college electives. It’s a fantasy/paranormal romance with a bit of mystery since she slowly unravels the truth about him and her connection to him. I’m enjoying writing it, but I’m not sure what my plans are for it. I will probably write some query letters once it’s done/edited while at the same time preparing to self-publish it.

Coffee. I used to hate coffee, but somehow it’s become a necessity every morning. 🙂 Of course I dump cream and sugar into it….

3.  I loved with the Labyrinth movie (and always wanted Sarah’s dress) when I was kid. I thought it was interesting that you were a big Bowie fan as well. Where were you first introduced to his music or found a liking for him?

I was actually first introduced to Bowie one Christmas back in high school because they always play that duet he did with Bing Crosby on the radio (Little Drummer Boy/Peace on Earth). I had heard of him but had never realized he had such an amazing voice. (I was listening to too much pop music back then, haha!) Strangely enough I didn’t get around to watching Labyrinth until college. I love that it still has a cult following now.

4.  Why did you start blogging?

I originally started blogging to post some of my old fiction and to get back to writing some new stories, which I’ve definitely been motivated to do. But it’s also turned into me writing about books, TV shows, music and other things that I like, which has been fun, too.

5. You mention you write fan fiction. Tell me more about that.

Usually when I get an idea for a fan fiction piece, it’s usually a short romantic or sexy scene between two central characters on a TV show that I like. For some reason, I’ve really been coming up with a lot of ideas from the show Once Upon A Time (OUAT). I’ve posted a few OUAT fan fiction short stories on my blog; this summer I’m planning to post some longer ones. Although the script is sometimes cheesy, I love how none of the characters on this show are completely good or evil. I think that’s a great theme to explore in writing. Also, it gives me several bad boys to over-analyze. 😉 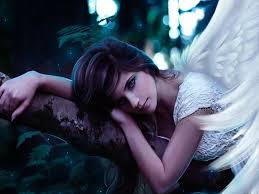 To top off this awesome interview, I’ll give you a tease of S.L’s novel, The Fallen.

In this excerpt Siobhan and Anna try and find out if Jasper is the same man they met long ago-the man who ‘changed’ Siobhan.

“I enjoy Greek mythology the most,” Jasper replies. “In general I tend to enjoy the stories that are more obscure. My favorite Greek myth is the love affair between Ares and Aphrodite.”

“Why’s that?” a girl asks. She’s on the fringes of the group and cranes her head around the guy sitting next to her so that Jasper sees her. “I didn’t think there was much of a story there.”

“I disagree,” Jasper says smoothly. “I think that the love stories of the gods are great examples of early guilty pleasure entertainment. Aphrodite and Ares’ relationship was sexy and forbidden.”

“So what is the story?” Anna wonders, looking around the group as if she’s missing something.

“Aphrodite, goddess of love and beauty, was forced to marry Hephaestus, the god of fire. Hephaestus is typically portrayed as being ugly and deformed. During their marriage, Aphrodite is unfaithful to him a number of times.”* Jasper’s silky voice is infused with an intense passion for this subject. The entire table has grown subdued, enraptured. This is the sexiest history lesson I’ve ever had.

“One of her affairs is with Hephaestus’ stepbrother, Ares, the god of war. When Hephaestus finds out, he tells Aphrodite he is going to be gone for a few days, but he sets a trap for them –a metal net that drops on Aphrodite and Ares when they’re in bed together, exposing their affair to Hephaestus and the rest of the Olympian Gods. Humiliating them.” There’s a bitter edge to these last two, more quietly spoken words. I wonder if anyone else has noticed.

A few of the others jump in with their favorite myths, although none of them captivate the group like Jasper did. Closer to eight, Anna leans toward me and whispers, “Do you want to talk after this? We can go to my place. I’ll give you a ride back later.”

“Um, sure,” I mumble back, again caught off guard.

Scattered “thank you’s” and squeaking chairs make me realize that everybody is getting ready to leave.

“I’m going to get some tea,” Anna informs me. I nod and decide to wait for her at the table. I get out my phone to text Tanya that I won’t be back until later. I think that everyone has left until I look up and see Jasper Mars standing up but lingering by the table.

I smile up at him. “Thanks for your help tonight,” I tell him to fill the silence. “I think it’s going to be a very interesting course.”

He responds with a smile of his own –a slow, deliberate smile that doesn’t show his teeth. “I hope so.” The smile disappears, and his dark, penetrating eyes seem to sweep me up and down, even though I’m still sitting. “You and Anna are looking well.” He turns on his heel and strides briskly away before I can come up with something to say.

“Ready to go?” Anna asks me, jiggling her car keys in one hand, her paper cup of tea in the other. I’m still staring at the spot Jasper has just vacated, dumbfounded.